As 2018 starts, we take a look at one of our favourite topics of conversation – integration - and what the industry has to say about it.

We look at why printers ARE and AREN'T integrating, what problems they’re facing and what the leading vendors have to say about integration. We also cover xJDF (the new version of JDF), Industry 4.0, the Cloud and the emergence of marketing automation integrations.

Why are printers integrating?

Tim Bernaerdt at Enfocus, emphasized that improved efficiency isn’t the only benefit, there are other positive impacts:

We expand more on this in our customer experience report

Earlier this year, InfoTrends conducted a study on European Software Investment Outlook, and it highlights some interesting statistics about integration:

A report put together for the printing industry in America, the Print Factory whitepaper, offers some interesting insights into the topic of integration and automated workflows.

The most recent run of the report found that astonishingly, despite the problems printers can have without an automated workflow, only 8% of printers do have a fully automated workflow, and most printers haven’t increased the amount they spend on software – averaging around $35,000 per year.

Almost a third (31%) of print companies in the US believe that investment in automation software is the answer to their productivity and workflow challenges, but despite that percentage, only 18% say that by 2019 they plan to be fully automated.

Why printers AREN’T investing in integration

The InfoTrends report from last year shows that the companies who have not invested in their workflow, gave the reason of:

The biggest barrier to integrated workflows seems to be incorrect artwork. In this article we mention how one of our customers reported that around 80% of the manual adjustments they have to make to artwork is down to incorrect specifications from the customer at the time of estimation.  And if a job is sent to Prepress with production specifications that don’t match the artwork file, the workflow essentially ‘breaks’. The problem is that printing companies can end up producing a price for an automated job that actually requires manual intervention.  Suddenly, the profitability of that job has shrunk.

Middleware tools such as Enfocus Switch and Esko’s Automation Engine are becoming increasingly popular as a method of automating tasks such as remote approvals and artwork preflight checks. Their benefit here is in removing the barriers created by incorrect artwork, allowing the majority of jobs to flow from the MIS to press without manual intervention.

What the leading vendors are saying

There has been an increase in vendor collaboration which is driving Industry 4.0. It is an important development and a positive move away from the mentality of ‘we didn’t invent it so we don’t want to use it’. The more companies collaborate, the more customers will benefit from a range of expertise from different providers.

In September 2017, Print Business held a round table meeting to discuss the benefits and challenges of integration and automation.

Andreas Aplien from Muller Martini highlighted changing customer needs because of a desire to integrate: “We are reaching the point where we are no longer delivering machines, we are delivering solutions,” he said. “Printing is relatively easy. Post press is complicated. It means we are selling complete solutions, not a standalone machine. Customers are moving from long run offset litho to short run digital and have asked us to help them cope with it.”

In an integrated workflow, data is key to success and Jim Todd from Heidelberg believes that printers are underestimating the investment needed to make the systems work: “There has been consolidation over the last 15 years. The survivors of that process are the ones that have been forward thinking. But now a lot of printers are underestimating the investment that is needed on the IT side of their business,” he explains. “How you drive a device is key to the utilisation of that device.”

Industry 4.0 is becoming an increasingly popular topic of discussion in the printing industry. The term is used to address the way the industry is evolving as printing companies move over to a more digitised, automated way of working. Otherwise known as ‘the fourth industrial revolution’, it’s a transformation that’s working its way through every sector of manufacturing.

The ultimate aim of Industry 4.0 for a printer is to create a ‘smart factory’, which means cyber-physical systems must communicate with each other and with decision-making humans in real time. This will not be easy to achieve in the printing industry; the printing process is never a one-size-fits-all and it involves many different people. To turn an idea into a printed reality, a lot of interrelated decisions have to be made, and that’s why system integration is such a key component for Industry 4.0.

JDF is an XML-based file format which was created by CIP4 to create a common language that would make cross-vendor workflow implementations easier. However, the industry had some issues with JDF – there were multiple ways of inputting and describing things, which made it more difficult than it was supposed to be.

xJDF is a much simpler version of JDF and has been created from a combination of industry feedback and experience from those who use JDF and the problems they had with it. There is only one way to create a job ticket with xJDF and everything has its place.

“XJDF is a continuation of JDF that should simplify and enable more widespread integration and automation in the graphic arts. It is well aligned with current XML technologies and thus will enable vendors to build automated products and even savvy printers with home-grown systems to automate their workflows more efficiently” CIP4

A major breakthrough with xJDF is that it can support product ganging, which wasn’t possible with JDF – JDF was one job for one product, xJDF can handle many products in one job.

Integrations with web-to-print solutions have become increasingly popular.  When fully integrated into an MIS, a web-to-print solution can remove a significant number of touchpoints. With our Infigo integration, which uses our API, the customer can now create their own quotes using real time MIS specifications and pricing, rather than just ordering pre-defined products.

The emergence of marketing automation integrations

Integrating an MIS with marketing automation software is a new consideration for the industry, as printers seek to include their marketing teams in their integrated system.

According to Autopilot (2015), marketers who use automation software receive twice the number of leads than those using blanket email marketing. Over two thirds (67%) of B2B marketers have seen at least a 10% increase in sales opportunities through lead development via marketing automation.

Back in July 2017, it was reported that 142,000 businesses are now using marketing automation software, which has resulted in a 14.5% rise in sales productivity.

Industry publication whattheythink.com points out the growing importance of marketing automation for the printing industry: “If print wants to be part of the discussion, it has to get on board. It can’t simply sit on the sidelines, hoping someone will ask it to play. Print has to be tracked, monitored, and measured the way digital channels are. It must be a force to be reckoned with, one that integrates into this omnichannel world and proves its value every bit as much as the digital channels do.”

Integrating into the Cloud

The cloud is a growing topic of interest for the printing industry. WhatTheyThink.com conducted a survey on US commercial printing establishments, in 2015, and the graph shows what services the printing establishments use the cloud for. They also found that the bigger printing companies use cloud services more than others, but the difference is narrow. Cloud based services are popular for things like file sharing services, and e-marketing, but only 4% of printing companies use the cloud for estimating. 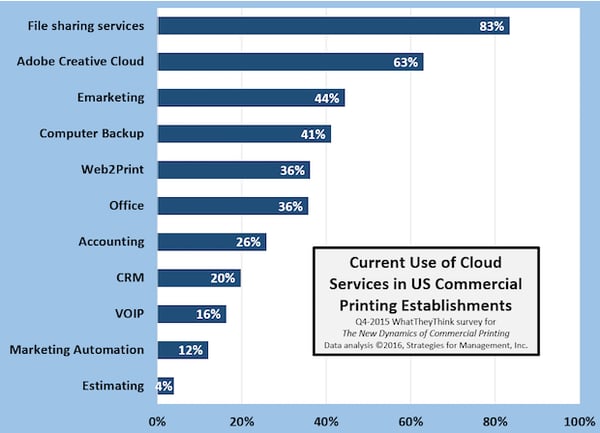 As detailed in this Printing News report, the industry is continuing to embrace Industry 4.0 and the move into cloud-based computing to evolve how certain parts of the workflow is managed. For example, there’s a trend towards data being captured from the print production workflow and sent to cloud-based Business Intelligence software. This provides insight for printers to make better decisions and track KPIs.

HP have invested significantly in their cloud based operating system PrintOS. They foresee an integrated, multi-vendor environment through a cloud-based operating system that changes the way print production is managed. HP announced at Drupa 2016 that more than 500 presses at over 300 customer sites are now connected to PrintOS. “We have invested immense thought, planning and architectural expertise over three years to build PrintOS and do it right from the ground up,” Simon Lewis, from HP said. “HP PrintOS is going to reinvent print production and the way PSPs run their businesses and generate growth.”

The reasons for integration have not changed in 2017 – printers typically head down this route when they need to deliver a higher number of smaller print jobs in a quicker time.

It’s no wonder then, that take up is good. Almost a third of US print companies believe that investment in automation software is the answer to their productivity and workflow challenges. But despite that percentage, only 18% say that by 2019 they plan to be fully automated. The main reported reason for this was a lack of in-house IT skills to help manage the project.

Various technologies are being used in integration projects, including middleware software such as Enfocus Switch that allows printers to self-automate. Adoption of web-to-print solutions continues to grow, with more than half of US printing companies adopting the technology and nearly a third of revenue being generated through this market. And while integration to marketing automation is in its infancy, this is something the industry needs to give further consideration to if we want print to “be a force to be reckoned with” in today’s cross-media marketplace.

The concept of Industry 4.0 has been a hot topic recently and we’re seeing the term increasingly used when referring to the industry’s progression towards the ‘Smart Factory’ – one that uses technology and data to increase efficiency. So, it’s no wonder that IT resource is a key theme. While a more collaborative approach from vendors and the launch of xJDF looks set to make integration projects easier in 2018, the lack of in-house IT skills will continue to be a barrier to success. This was an underlying theme throughout the year and reflects a need for printers to stop underestimating the investment that is needed on the IT side of their business, and accept that this is where the future wins will come from.

Yes they do! All the hard work you've put into creating an automated workflow is being undone. Find out where, why and how you can fix this.

03/08/18 10:10 |
1 min read
Previous Story
← The importance of Customer Experience for the printing industry
Next Story
How to use an API in your print business: 5 ideas to get you thinking →

These Stories on integration

Let us know what you think